Ted writes, records and travels the world performing his own country / roots / Americana music from his seven critically-acclaimed albums. Ted also plays live, records sessions, and collaborates on songs with A-list songwriters and musicians in Nashville, Austin and around the world. Ted recently built a new studio — The Den — and has already produced several well-received albums for fellow artists 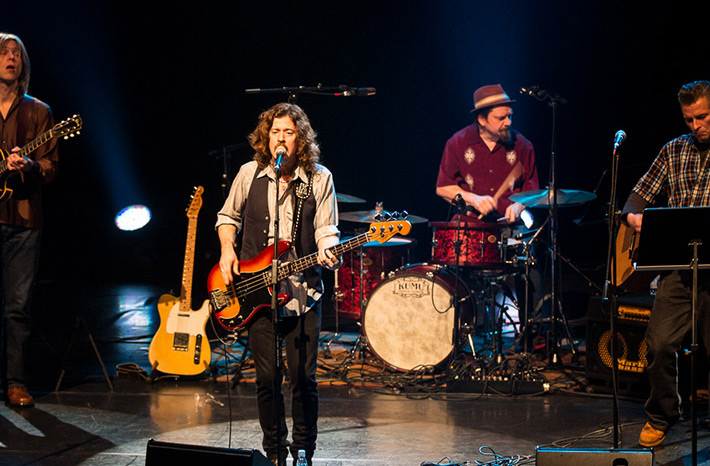 Ted is well known for his ability to step into bands and rock all genres of music — the decades he spent holding down the bottom end for bands as diverse as Shooter Jennings and Wilson Phillips made sure Ted had the chops for anything from major festivals to David Letterman appearances.

The last few years have found Kamp focusing on his own career. He tours continuously in the US and Europe, and has releasing his solo albums to critical acclaim. His records have debuted at #1 on the Euroamericana Chart and made the US Americana Chart’s Top 100 Records of the Year. The Big Takeover wrote, “Kamp simply knocks one ball after another out of the park…Saturated in talent and sincerity … good music done right.”

This Jack of all trades points to Dave Stewart and Buddy Miller as role models, in the sense that they move so seamlessly between the roles of sideman and frontman while supplying both substance and glue to every project they take on.

“The biggest challenge,” Ted says, “is always to be myself and express myself while still supporting others. Bringing in traditional elements is a way to make the music classier and more timeless, in my opinion, whether it’s to enrich my own music or to make anything I’m part of as great as it can be.”

“I’m a New Yorker who’s thoroughly fascinated with Southern music,” Ted points out. “Most of my favorite records were made within a few-hundred-mile radius that circles Memphis, Nashville, Muscle Shoals, New Orleans and up the Mississippi River, Dallas and Austin. It’s incredible — the passion, the storytelling and the soul that came out of that part of the country. It’s a huge part of the American voice.”

Ted dove into music after college. He spent several years woodshedding in Seattle, and recorded four LPs with his trio Ponticello before moving to LA in 2001. Once in LA, Ted formed the group Union Pacific, played with numerous bands, did extensive session work. That led in 2003 to Shooter Jennings pulling him into his band. And Ted’s never looked back. Whether he’s headlining a major show in the Netherlands with European superstars, playing Gruene Hall in mid Texas in the dead of summer, rocking an LA honky tonk with some of the best players in town, or working in his new studio to pull the soul from each song, Ted pours his drive and musical talent into every note.